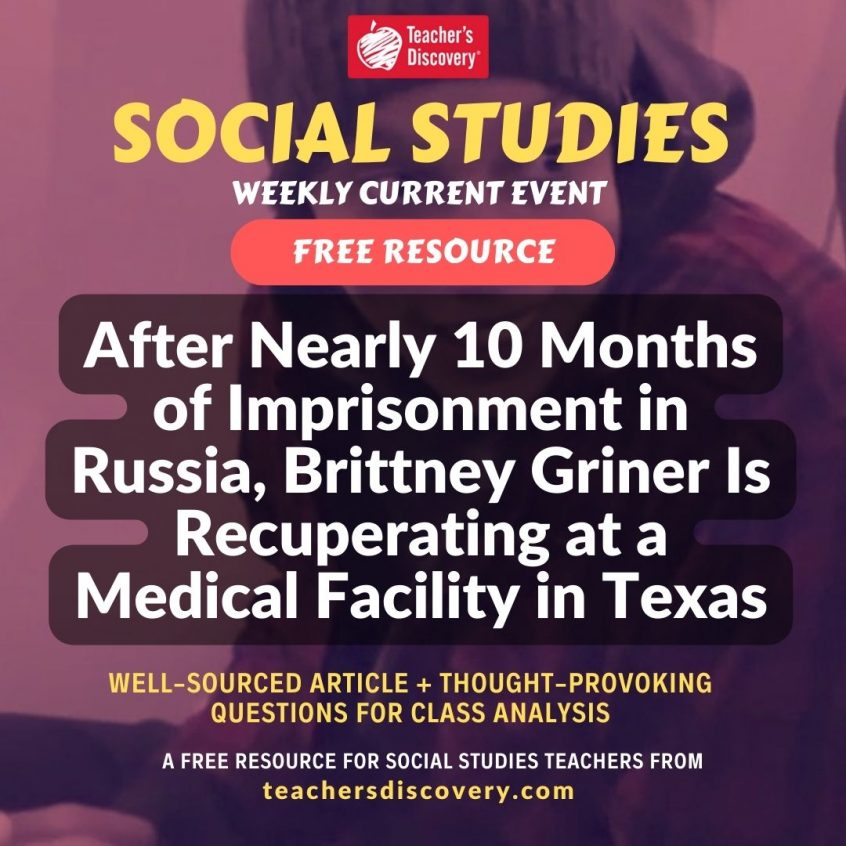 After Nearly 10 Months of Imprisonment in Russia, Brittney Griner Is Recuperating at a Military Medical Facility in Texas

The following Social Studies event discussion is based on the original news article "After Nearly 10 Months of Imprisonment in Russia, Brittney Griner Is Recuperating at a Military Medical Facility in Texas," by Nouran Salahieh, published December 12, 2022 (originally accessed 10:18 a.m. EST), by CNN. The article reports on how, finally back on American soil after nearly 10 months of imprisonment in Russia, WNBA star Brittney Griner is spending time at a medical facility in Texas before she returns to her regular life. 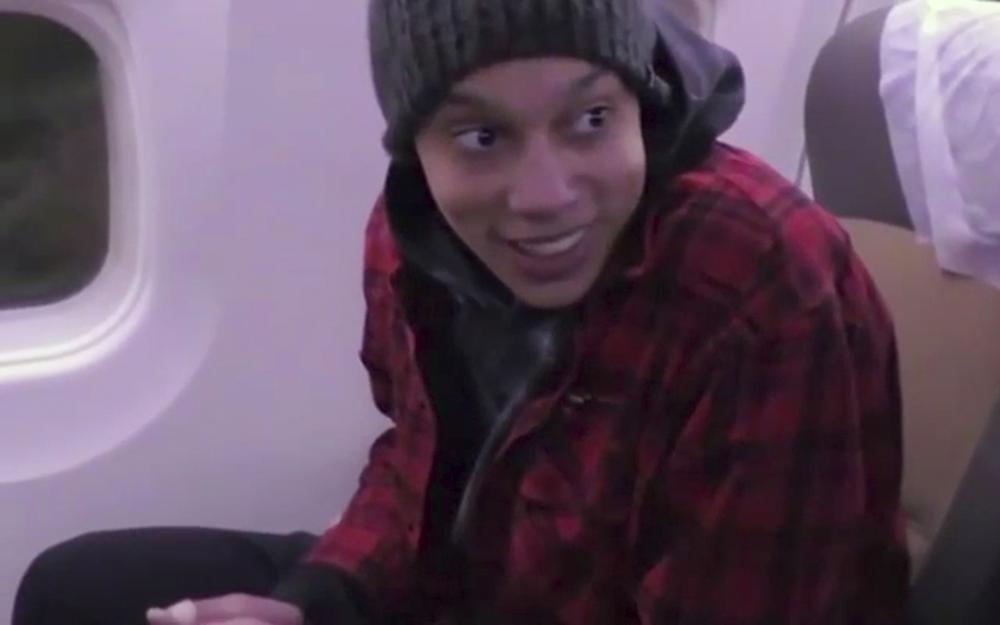 Finally back on American soil after nearly 10 months of imprisonment in Russia, WNBA star Brittney Griner is spending time at a medical facility in Texas before she returns to her regular life.

The basketball star—who was released Thursday as part of a prisoner exchange between the US and Russia for notorious convicted arms dealer Viktor Bout—arrived at Brooke Army Medical Center in San Antonio for a routine evaluation early Friday, and officials have not specified how long she will be there.

“I’m understanding that it’s going to be a few more days before she gets out,” Bill Richardson, a former New Mexico governor, told CNN on Sunday. Richardson and his center privately work on behalf of families of hostages and detainees. He previously traveled to Russia to discuss Griner’s release, as well that of Paul Whelan, a former US Marine who remains in custody.

Griner’s release through the prisoner exchange took months to negotiate and marked an end to months in confinement after the basketball star was arrested on drug charges at a Russian airport in February and then sentenced to nine years in prison.

The Texas facility Griner is at would stand in stark contrast to the Russian penal colony she was held in before her release.

During her time there, Griner had to cut her now-famous dreadlocks to make life easier during the Russian winter, Griner’s Russian lawyer, Maria Blagovolina, told ESPN—and confirmed to CNN.

Most of the women in the penal colony worked sewing uniforms, but the 6-foot-9 Olympic gold medalist was too tall to sit at a work table and her hands were too big to manage the sewing, so she carried fabric all day, her attorney said.

“We are now focused on ensuring that Brittney and her family’s well-being are prioritized and that all available assistance can be offered to them through an appropriate manner,” US State Department principal deputy spokesperson Vedant Patel said at a news briefing Friday.

Richardson said it’s important to give former detainees like Griner space as they settle into life after their release.

“We’ve got to give them a little space, a little time to readjust because they’ve had a horrendous experience in these Russian prisons,” said Richardson, who served as US ambassador to the United Nations in the Clinton administration.

‘I’m here to take you home’

On the day of her release, Griner was given a sense she would be going home, Special Presidential Envoy for Hostage Affairs Roger Carstens, who led the mission to conduct the prisoner exchange in the United Arab Emirates, told CNN.

But it didn’t feel real until the moment he was able to board the plane and tell her that “on behalf of the President of the United States, Joe Biden, and Secretary of State Tony Blinken, I’m here to take you home,” Carstens said.

He described Griner as an intelligent, compassionate, humble, and patriotic person, who seemed healthy and full of energy during the trip.

“When she finally got on to the US plane, I said, ‘Brittney, you must have been through a lot over the last 10 months. Here’s your seat. Please feel free to decompress. We’ll give you your space,’” Carstens recalled.

“And she said, ‘Oh no. I’ve been in prison for 10 months now listening to Russian, I want to talk. But first of all, who are these guys?’ And she moved right past me and went to every member on that crew, looked them in the eyes, shook their hands and asked about them and got their names, making a personal connection with them. It was really amazing,” Carstens said.

He described Griner spending 12 hours of an 18-hour flight talking with him “about everything under the sun.”

“We missed her last year. It wasn’t the same in the WNBA without her,” McCoughtry said. “We don’t start until May, so that gives her a couple months to gather and get back in shape and get back in the groove, smell the American air again.”

“We all want to see her, but we’re going to give her time and space and get her medically evaluated, mentally, emotionally and physically,” WNBA Commissioner Cathy Engelbert said.

Jorge Toledo—one of the “Citgo 6”—spoke to CNN Saturday about how reintegration into society can take time and effort after prolonged captivity. Toledo was released in October—also as part of a prisoner swap—after being detained while on a 2017 business trip to Venezuela with other oil and gas executives from the Citgo Corporation.

Having spent five years in captivity, Toledo said he came home with trouble sleeping and other health issues, and saw minor, everyday tasks like driving become sources of anxiety.

Toledo said he was part of a program in San Antonio that involved six days with a group of psychologists. He said the program was “extremely important” for his reintegration and hopes Griner can take advantage of similar resources.

Fate of Whelan’s release is unclear

While many celebrate Griner’s return, the possibility of a release for Whelan remains unclear.

Whelan—a US, Irish, British and Canadian citizen—is currently imprisoned in a Russian penal colony after he was arrested in December 2018 on espionage charges, which he has denied. He was sentenced to 16 years in prison. He, like Griner, had been declared wrongfully detained by US officials.

With Griner now back in the US, Richardson said he’s optimistic about Whelan’s release, and noted Russia did previously offer a trade for Whelan.

The US tried to persuade Russia to swap both Griner and Whelan for Bout, but Russian officials would not budge on the matter, with Russia saying the Americans’ cases were handled differently based on the charges each of them faced.

“This was not a choice of which American to bring home,” President Joe Biden said last week. “Sadly, for totally illegitimate reasons, Russia is treating Paul’s case differently than Brittney’s. And while we have not yet succeeded in securing Paul’s release, we are not giving up. We will never give up.”

Whelan said he was happy Griner was released, but told CNN, “I am greatly disappointed that more has not been done to secure my release, especially as the four-year anniversary of my arrest is coming up.” 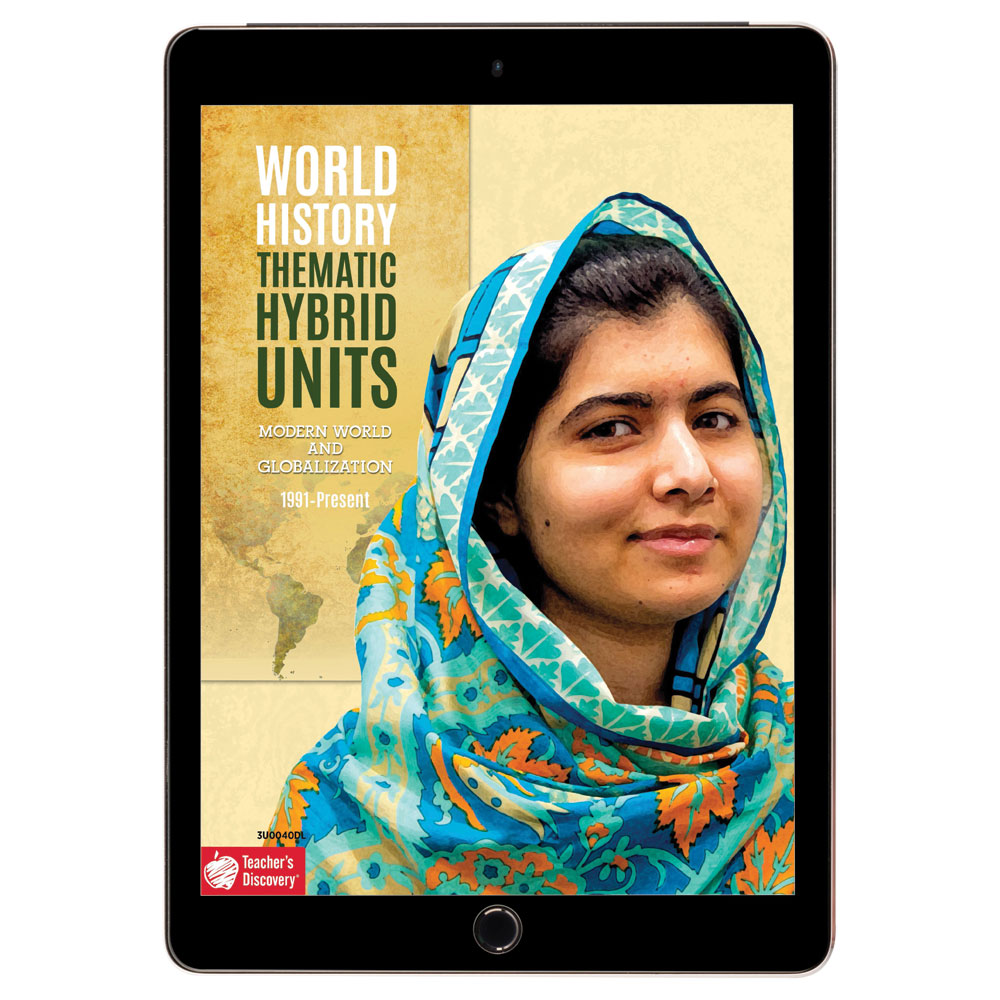 Put Griner’s imprisonment and our relationship with Russia in context with a modern history unit that has everything you need: historical background, daily warmups, content and skills practice, graphic organizers, primary sources, out-of-the-box activities, resources, and more.

Here’s What 2023 Has in Store, As Predicted by Experts in 1923 – Social Studies Weekly Current Event from Teacher’s Discovery

What Were the Headlines in 2022 That Mattered Most to You? – Social Studies Weekly Current Event from Teacher’s Discovery 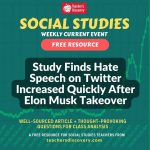 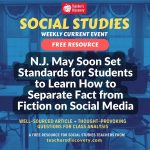 N.J. May Soon Set Standards for Students to Learn How to Separate Fact from Fiction on Social Media – Social Studies Weekly Current Event from Teacher’s Discovery