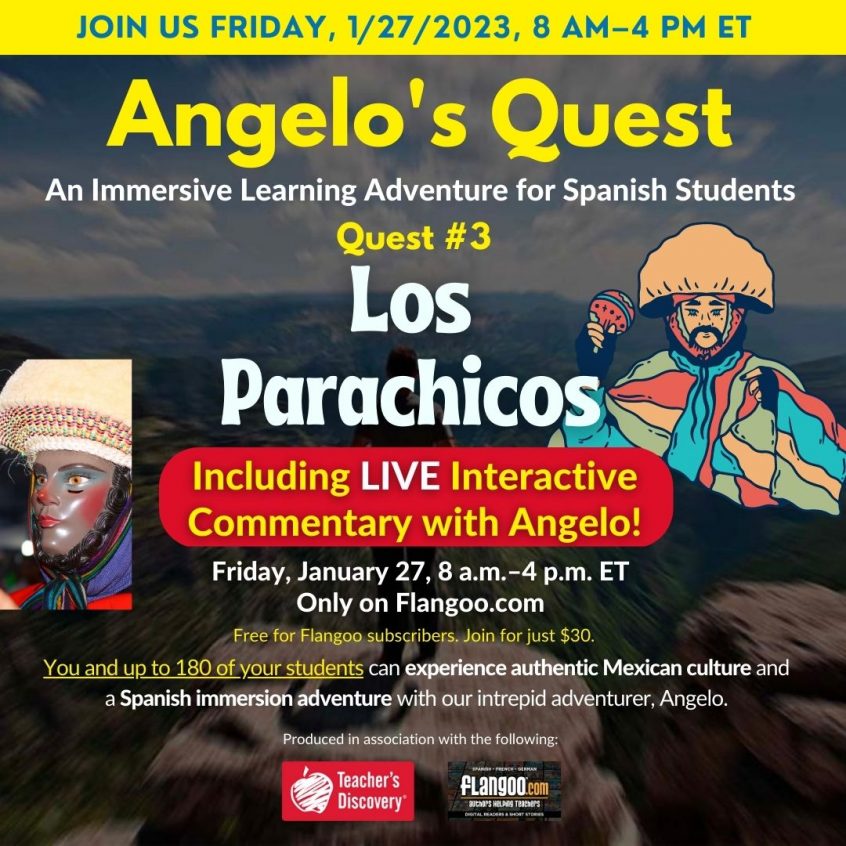 Including LIVE interactive commentary with Angelo!
Get Access Now

Take your class to Mexico and learn Spanish along the way with our intrepid adventurer, Angelo!

Real-time immersion. It's going to be a wild ride!

Teacher's Discovery is at it again, innovating Spanish language education and student engagement with a wild experiment in immersive language learning.

We're following a native Spanish-speaking teacher, Angelo, and capturing his interactions, conversations, and adventures as he seeks to complete quests throughout Mexico. Everyone is invited to follow along to experience culture-rich and hair-raising activities that are sure to captivate and engage your middle school and high school Spanish students in and out of the classroom.

Angelo's Mexico Quest: Los Parachicos will be a livestream combination of content recorded live on location in Mexico along with real-time interactive commentary with Angelo - LIVE during the broadcast!

Free to Flangoo subscribers. Not a subscriber? Join in! Just $30 gets you and up to 180 students one month of access to Angelo's ongoing immersion quests and the entire Flangoo World Language digital reader library. An annual subscription is just $169.

This quest will take place at Chiapa de Corzo, a "Pueblo Mágico” located in the southern Mexican state of Chiapas.

Chiapa de Corzo is one of the oldest settlements in all of continental America. It was founded by the Spanish in 1528. Multiple celebrations take place throughout the year, but on January 20, the Fiesta Grande del Parachico in honor of San Sebastián takes place and Angelo will be there.

During the fiesta, Angelo will be surrounded by hundreds of masked Parachicos dressed with colorful sarapes. The Fiesta Grande includes gastronomic adventures as well as gorgeous arts and crafts exhibits. Let Angelo be your guide!

Angelo will also be LIVE during the scheduled broadcast January 27 from 8 a.m. to 4 p.m. ET on flangoo.com/live.

Angelo will be adding additional real-time commentary to the program as well as answering your questions directly onscreen!

It’s going to be another wonderful event full of authentic culture and Spanish language immersion.

And as always, you never know what might happen! The only thing we can predict is we will get to experience authentic interactions and cultural events, and utilize the most common Spanish verbs in his encounters along the way.

*Changes may occur as the event unfolds.

The Parachico or Parachicos are traditional dancers from Chiapa de Corzo, Chiapas, Mexico, who dance on the streets of the town during the Fiesta Grande festivities, which take place from January 15 to 23 every year.

It is claimed locally that, like many of the Catholic festivals in Latin America, it has its roots in the much older indigenous culture, so it has developed into a hybrid of old indigenous culture and newer Catholic and Spanish cultures.

The church where the festival concludes is home to an old tree which, according to residents, predates the church. This tree is said to represent the "tree of life" (drawing on Maya and other pre-Hispanic American cultures), which would suggest that this site was used for ceremonies before the arrival of Catholicism.

There are many versions of the history of the Parachicos, but all the stories say that one day a beautiful woman arrived seeking a cure for her sick son. She had taken him to visit doctors and healers, but all failed to alleviate his suffering. Someone told her to go to Chiapa de Corzo, where surely she would find a cure, so she moved there with all her servants, and there her son was finally healed.

When she realized that the village was one of humble people, she tried to reward them by distributing food. Meanwhile, the natives danced around the boy—painted and disguised to look white like his mother, so the little one would not be scared. When the lady, whose name was Señora María de Angulo, gave the gifts to the dancers, she said: "for the boy," or "para el chico," shortened to "Parachico."

Parachicos wear wooden masks with white features, such as light skin, facial hair, and blue eyes, in contrast to Native people's features. They also wear a round headdress, colorful ribbons, striped sarapes, and embroidered shawls, usually over a black or dark shirt and trousers.

Parachicos use metallic rattles locally known as chinchines, with colorful ribbons attached to the top and/or handles, which are shaken as they dance and chant.

How to Watch Angelo's Mexico Quest

The program will be available on Flangoo.com, the leading World Language digital reader library for World Language teachers and students. Over 350,000 students are using Flangoo.com to improve their language proficiency today. Teachers love it.

Current Flangoo.com subscribers get access to all quests for free.

New subscribers can subscribe for as little as $29.99 for one month of access for themselves and up to 180 students. No ongoing obligation.

We hope you enjoy Flangoo as much as you love Angelo's Quest. It's all about engaging (and cost-effective) ways you can improve your students' language proficiency.

We have a full schedule of quests planned! Don't miss out.

A full-year subscription to Flangoo is only $169.

Save up to 57% with a multi-year subscription. There's no better bang for your World Language buck!

*Quests are subject to change.

Angelo's Quest will be broadcast on Flangoo.com with the help of the YouTube® platform.

If you plan to watch Angelo's Quest episodes, please talk to your IT person or tech department to ensure they allow videos from our Teacher's Discovery YouTube® Channel through your school's firewall. You can check to see if it works beforehand by going to flangoo.com/live and playing the YouTube video there.

Angelo's Mexico Quest is being produced in association with the following: 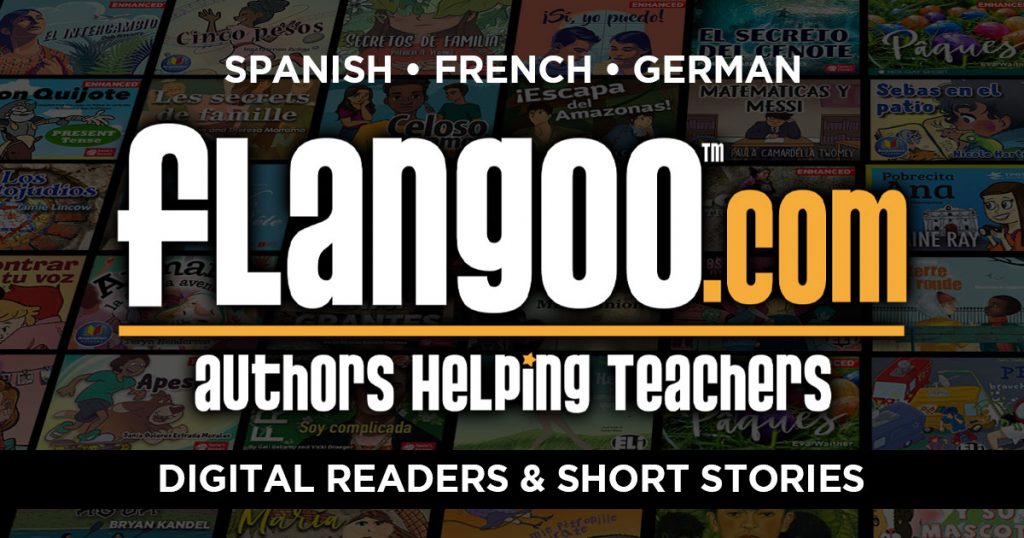 This is an entirely new spectacle for Spanish learners. We want to create a safe yet "real" learning adventure where Spanish language and regional culture play a central role in each quest. If everyone likes this form of Spanish learning, we'll task Angelo with another livestream quest!

To be notified of the latest developments and news regarding Angelo's Mexico Quest, sign up for updates.

Thanks for subscribing! We'll keep you informed.

We're here for you. 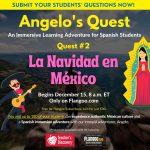 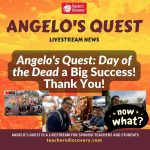 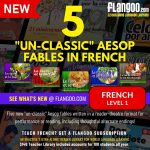