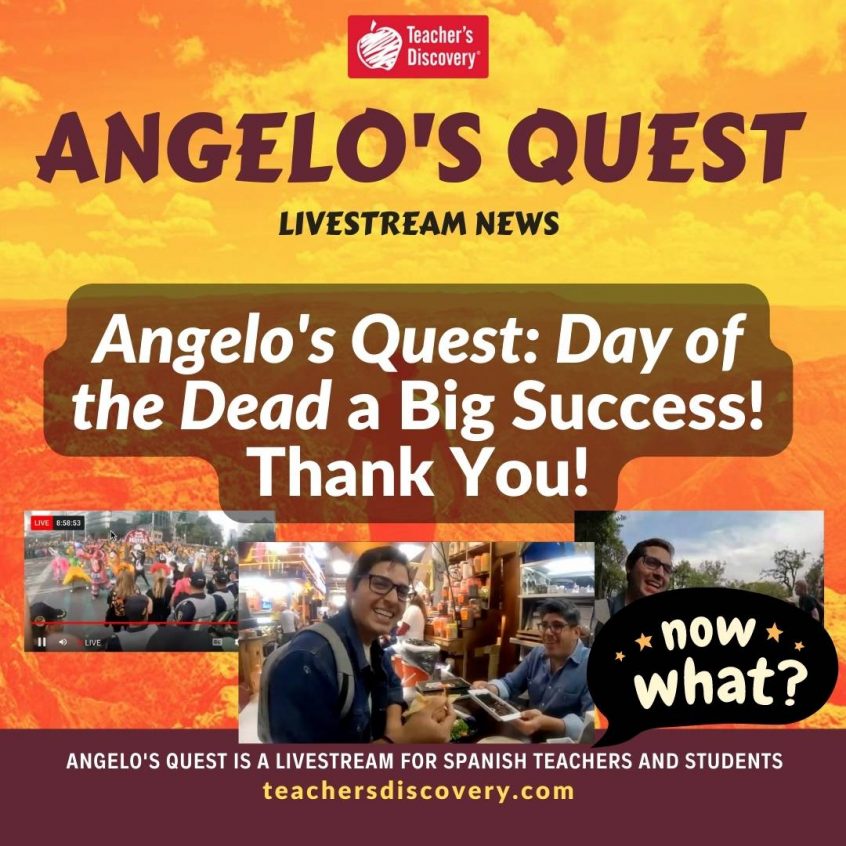 Angelo's Quest: Day of the Dead Livestream Was a Big Success - What's Next?

Livestream News and a Word of Thanks from Skip McWilliams, President, Teacher's Discovery

Angelo's Quest: Day of the Dead was a first-of-its-kind educational livestream for Spanish classrooms available on Flangoo.com, presented by Teacher's Discovery. The livestream, which ran daily from October 27 through November 2, 2022, gave Spanish teachers and students a real-time Spanish-language and cultural immersion adventure in Mexico City during Día de los Muertos (Day of the Dead). 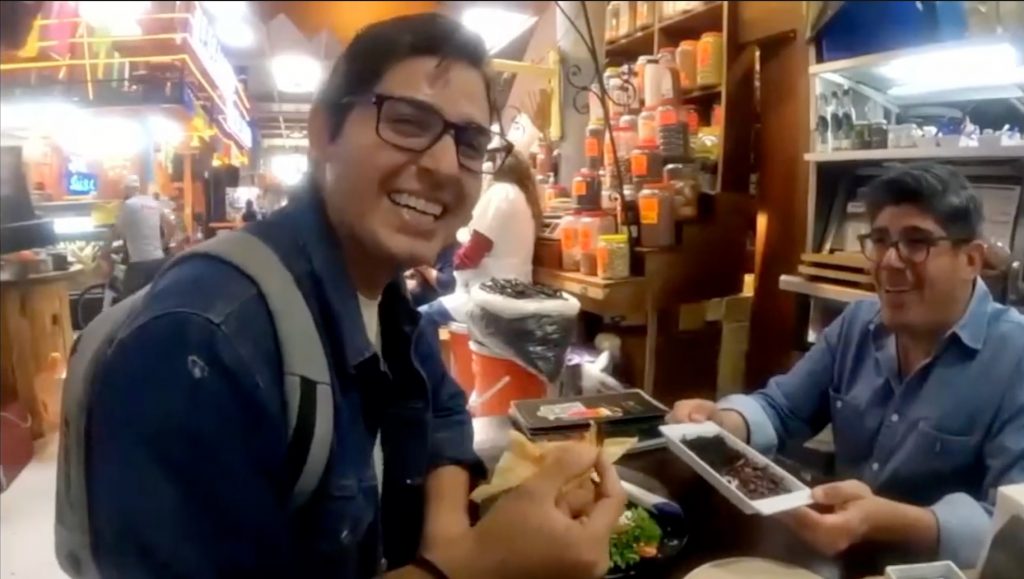 Angelo's Quest: Day of the Dead was a first-of-its-kind educational livestream for Spanish classrooms available on Flangoo.com/live, presented by Teacher's Discovery. The livestream gave Spanish teachers and students a real-time Spanish-language and cultural immersion adventure in Mexico City during Día de los Muertos (Day of the Dead).

During the livestream, "Angelo," the intrepid adventurer host traveled to and around Mexico City during the week leading up to the traditional Day of the Dead celebration on the first two days of November.  The livestream captured authentic Spanish conversations, culture, and learning interactions along the way.  Teachers and their students could follow along at any time online via the online World Language learning platform Flangoo.com.

Students could send live questions to Angelo, which he would answer during the livestream. Live polls gave students the ability to vote for what Angelo would do the following day. The livestream captured the official Day of the Dead parade in Mexico City, the daily life, traditions, and social experiences in both rural and modern urban areas in and around Mexico City, as well as several stops at museums and monuments illustrating Mexican history and culture.

The idea was all about real-time immersion and the practical use (and acquisition) of the Spanish language. For many students it was their first real glimpse of Mexico, or any country outside of the U.S.

Video highlights from each day of the Angelo's Quest: Day of the Dead livestream are available on the Teacher's Discovery YouTube® Channel.

Here's a Recent Word of Thanks from Skip McWilliams, President of Teacher's Discovery

Buenos Días to All

"Ideas are easy... in the doing are the miracles."

Angelo’s Quest was a quest for Teacher’s Discovery. Livestreaming an event to America’s classrooms had never been done before.

That didn’t stop a remarkable team of educational adventurers who set out to make Angelo's Quest livestream a reality.

It was a success! The cultural images were memorable. The real-time aspect was engaging. The language flowed well. Annoying transmission glitches notwithstanding, the teachers and students loved it!

Steve Giroux assembled this remarkable team to make his vision of Angelo’s Quest a reality.

It started with Jay Babcock and Alan Leyva who worked out the baffling tech challenges of livestreaming a camera on a guy's head to classrooms from where? And where? And to where? And how did you say?!?

Sonia Estrada McWilliams found Jesus Mauricio Torres Mancilla (Angelo), whose gifts as an actor and high school teacher combined made him the perfect presenter! We have no idea how he was able to stay chipper and fresh after 12 continuous hours LIVE on camera! A Broadway play is only 2 hours long! The secret was that he was being himself... genuine... real.

Then Sonia asked her good friend Nathalie Desplas Puel, who heads up the Secretaría de Turismo de la Ciudad de México, for her support. Nathalie eagerly joined in with the full resources of the Secretariat to smooth the way in one of the biggest and most complex cities on the globe.  Nathalie’s secret agent was Armando Machorro, of the Coordinación de Promoción Turística de la Secretaría de Turismo de la Ciudad de México, who arranged the visits and prearranged  scheduling for Angelo, working out small miracles on the run behind the scenes. Liliana Saldana of the Secretaría de Cultura kept us updated on the constantly shifting dates of the events.

Our friend Alejandrina González lent us the services of her resourceful teammate Julio Acevedo (Julio), who shadowed Angelo and kept the production flowing. Angelo’s remarkable makeup was done by Helen López Omaña.

Then, Alan Leyva kept the operation running, solving problems and emergencies on the fly while it was happening... a little like repairing your bicycle while you are riding it down a busy street! Did Alan ever find time to sleep?

Bobby Anderson’s publicity created the "Something BIG is coming" atmosphere, fired up current subscribers, and attracted lots and lots of new teachers to the Quest and Flangoo. No easy task. In the time running up to the launch, the concept, schedule, and everything else kept changing, and presented a moving target for Bobby. He valiantly attacked this "ready, fire, aim'' project. The daily social posts and highlight videos during the event were all him as well.

Romulo Romero made sure the funds were there, where and when needed.

Deb Rodegher and Denise Hatcher created the exercises that perfectly fit the program. Tina Groleau, Destany Pitman, and Andrea Barlow set up and trained the rush of teachers wanting to sign up for Angelo's Quest at the last minute.

Steve Becker did the graphics and was on standby with Carol Petterssen should Frank or Brandon need help.

The key members of the team were the Spanish teachers in each classroom who figured out how to integrate this real-world experience into an effective and compelling cultural lesson for their students.

Skip McWilliams
I am proud to say, President of Teacher’s Discovery
The leader in Digital Resources for Educators

Teacher's Discovery is working on a series of livestreams to follow and expand upon its initial success during Day of the Dead.

If you would like to stay updated about more Teacher's Discovery livestreams on Flangoo.com, subscribe to our blog.

Gain a Library of Digital World Language Readers with Time-Saving Teacher Controls for Less Than $1 per Student!

Starting as low as $29/mo or $149/year.  No commitment.
One teacher subscription includes 180 student accounts for free! 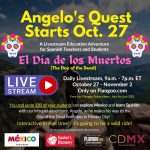 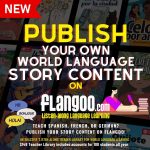