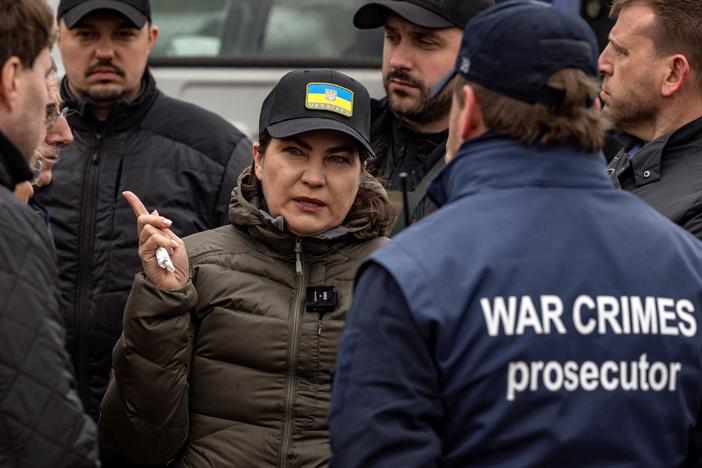 Back in March, a White House reporter got President Biden to say out loud that he considered Russian President Vladimir Putin “a war criminal.”

Those words resounded like a pistol crack in Washington and around the world. Even in the realm of rhetoric, accusations of war crimes carry weight. Attaching Putin’s name made the moment all the more portentous, darkening the war clouds already gathering over the two nuclear superpowers.

This week, after the world saw gut-wrenching visuals of atrocities perpetrated against Ukraine’s civilians, talk of war crimes seemed suddenly commonplace. The consensus shifted. The evidence of war crimes seems all but undeniable, and Russian claims to the contrary could scarcely diminish the chorus of condemnation.

Yet, it does not follow that Putin or anyone else will be prosecuted for these crimes or any others committed in Ukraine. Responsibility is difficult to prove conclusively in a war zone, and evidence must link such acts to national leaders far from the battlefield.

The International Court of Justice at The Hague is the United Nations’ highest court, and at Ukraine’s request, that body has ordered Russia to halt its invasion of Ukraine. But as NPR’s Bill Chappell reported this week, the high court has no way to enforce its order, and of the other international bodies with jurisdiction over military abuses, “few have any leverage over Russia.”

That said, there have been instances of prosecution and even conviction for violations of the rules of war that were established by international conventions starting more than a century ago. Beyond these Geneva Conventions, there have also been prosecutions and even convictions for more recently defined crimes, such as “crimes against peace,” “waging wars of aggression” and “crimes against humanity” that were codified after World War II.

Precedents from horrors past

Those newer formulations emerged as nations came to terms with the Holocaust and other enormities committed by the Nazi regime of the German dictator Adolf Hitler. Hitler died in Berlin in spring 1945, but two dozen of his subordinates and top military commanders were indicted for war crimes later that year.

They were tried by an international tribunal composed of judges from the U.S., Great Britain, France and the Soviet Union. The court met in the German city of Nuremberg, famous for the size and fervor of its pre-war Nazi rallies. Most of the defendants were convicted, and half were sentenced to death.

In the years that followed, there were successors to these trials, both in Germany and Japan. But they were less lurid in detail and followed by the public far less.

There have also been war crimes trials elsewhere, often held…many years [after] the atrocities. Just this month, a trial began in the Hague for the accused leader of the Janjaweed militia in the Darfur region of Sudan. Those militia were noted for their brutality in a war that killed more than 200,000 people and drove 2 million from their homes.

Between 1994 and 2016, scores of trials were held for persons accused of taking part in the Rwandan genocide conducted by extremist Hutu tribesmen against the Tutsi tribe and its allies among the Hutu tribe. In the end, however, the key leaders of the slaughter were not prosecuted. This omission was decried at the time as “victor’s justice.”

In 2018, nearly 40 years after the mass killings carried out by the Khmer Rouge in Cambodia, two senior leaders of that movement were sentenced to life in prison. They included the former No. 2 for dictator Pol Pot, aged 92 when sentenced, and the 87-year-old former head of state. Pol Pot himself had died two decades earlier.

The main difference between the acts of these convicted war criminals and those of others who were never charged does not appear to be in the nature of the crimes. They are heinous in either case. The difference was that some perpetrators were legally vulnerable and others were not. The vulnerable could be brought to justice because they had already been defeated militarily or politically or both.

Other leaders who remained in power despite committing what appeared to be obvious war crimes have been beyond the enforcement reach of international law.

The case against Milosevic

Perhaps the most compelling recent case of a war crimes trial in recent history was the indictment, arrest and trial of Slobodan Milosevic, the Serbian leader who also served as president of the federation of Yugoslavia (of which Serbia was a part). The various independent republics of that federation fell out in the 1980s following the death of the longtime Balkan strongman Josip Tito.

The Balkan wars of that period were by far the worst outbreak of violence Europe had seen since the First and Second world wars, and the stories from disputed Bosnia and environs were all too evocative of those earlier conflagrations.

They were especially disturbing in the emphasis on ethnic, religious and tribal hatred, a spirit captured in the phrase “ethnic cleansing.” Horrifying in itself, the phrase was largely a euphemism for genocide, a term first used in a court of law in Nuremberg 50 years earlier.

In the late 1990s, Milosevic’s Serbs were intent on removing ethnic Albanians from Kosovo, an independent but adjacent republic that Serbs had long considered their territory.

As civilian refugees fled Kosovo by the hundreds of thousands, NATO stepped in and demanded the Serbs back off. When Milosevic refused, NATO sent troops supported by an intense U.S. campaign from the air, which included the bombing of critical infrastructure in Serbia—including the capital city of Belgrade.

The bombing in Serbia was ordered by President Bill Clinton, who faced intense criticism in Congress and in the general public. Most Americans found it all confusing. Even one of Clinton’s own White House staffers, Anne Edwards, reported that in Albania, “everything had layers and layers of ‘meanings,’ and histories and vendettas.”

In the end, no U.S. ground troops entered the fray and the air war resulted in no American casualties. But it helped force Milosevic to back down and leave Kosovo.

Russia, a traditional ally of the Serbs, objected to the NATO and U.S. involvement. But as it was in the throes of its own post-Soviet upheaval, it was powerless to intervene. All the same, the perception of humiliation changed the political calculus in Russia, weakening the democratically elected President Boris Yeltsin and contributing to the rise of his hard-line successor. That successor was Vladimir Putin, and he has been the central power figure in Russia ever since.

But at the time, many in Europe wanted someone to pay a price for what had happened in the Balkans and some of the most prominent Serbian leaders became targets.

One was Radovan Karadzic, a Serbian psychiatrist, poet and politician who was held responsible for the massacre of more than 8,000 Muslim men and boys in the Bosnian town of Srebrenica in 1995. After years in hiding, working under an alias, he was captured in 2008 and sent to The Hague for trial, which was delayed for years before he was convicted in 2016. He is now in a British prison, serving a life term.

Also prosecuted for the massacre in Srebrenica, as well as for war crimes against civilians in the Bosnian capital of Sarajevo, was the Serbs’ notorious combat leader Ratko Mladic. He too evaded capture for years after his original indictment. Finally arrested in 2011, he was tried in the Hague and convicted of genocide and other crimes in 2017. His conviction was upheld in 2021, and he is now 79, serving a life sentence.

But while Karadzic and Mladic managed to avoid detection for years, Milosevic had never really left the public eye. He had been not only the embodiment of Serbian nationalism (and principal architect of the Kosovo War), but also the Yugoslav president, powerful enough to remain de facto leader even after officially out of office.

The damage done by the NATO-U.S. campaign, however, and the failure of Milosevic’s war aims, turned voters against him in the fall of 2000. Thus exposed, he became a target for international law enforcement. In addition, he had made himself more vulnerable to prosecution by naming himself commander of his armed forces. When he was no longer also the head of state, he could be seen in his military guise and was regarded as responsible for actions at the battlefield level.

So exposed, Milosevic was swiftly indicted by the International Criminal Court, taken into custody and transferred to The Hague. There he refused legal representation, insisting the court had no jurisdiction over him. Whenever the court convened, Milosevic would represent himself and do all he could to disrupt the proceedings. His failing health over the next several years also delayed the trial, which ended when he died of a heart attack in 2006.

Shift the focus to the U.S.

By the time of Milosevic’s death, the international focus had shifted to the Middle East, where the U.S. had invaded Iraq in 2003 and occupied it for nearly three tempestuous years. Iraq under dictator Saddam Hussein had become the focal point in the U.S. “global war on terror,” a campaign begun after the hijacked airliner attacks on New York and Washington on Sept. 11, 2001.

The war in Iraq was marred by many actions by U.S. personnel, the most notable being the physical and psychological abuse of Iraqi prisoners in the Abu Ghraib prison run by the U.S. Army and the CIA.

But the post-Sept. 11 national mood was such that most Americans readily accepted the U.S. bringing captured enemy combatants to an offshore prison in Guantanamo Bay, Cuba, where some remain even now. The U.S. was also reported to be using extreme methods of interrogation, including “waterboarding,” a form of partial drowning that is widely considered torture. Under a secret program known as “extreme rendition,” captured terrorism suspects were flown to interrogation sites far from their home countries and far from the U.S.

Critics in the U.S. joined a chorus of international objection to these methods, which many called war crimes.

The accusations often centered on Vice President Dick Cheney, reputed to have been an advocate for “tough on terror” tactics.

Some countries even issued indictments against President George W. Bush or Cheney or both. In Malaysia, both men and their legal advisers were tried in absentia and found guilty.

In the U.S., at least, Bush and Cheney were regarded as insulated from international charges by the War Crimes Act of 1996, passed by big majorities in Congress well before the war on terror and signed into law by Clinton.

That law, still on the books, sets penalties in the U.S. for anyone committing a war crime (as defined by the Geneva Conventions) where the victim or perpetrator is an American. It was later amended by the Military Commissions Act of 2006 to limit its scope, after concerns were raised that it might be used against American officials.