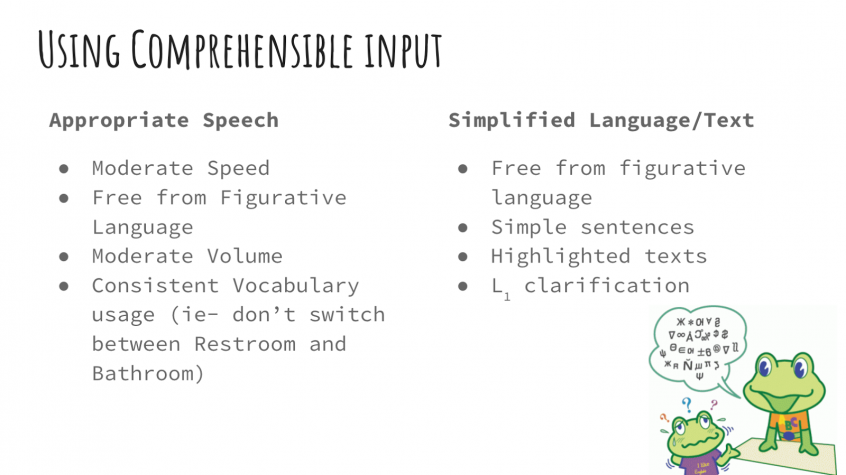 Welcome to the three most useless words in all of teaching.

We’re told to find out whether or not students understand, and we really do want to know. We teach with comprehension-based strategies, so there had better be comprehension going on! Given that our time in the classroom is limited to start with—even before kids start not showing up, or having “more important” things to do that period—we need to be efficient and direct in checking for comprehension, and this is a very direct and efficient question, isn’t it?

It is. It’s just the answers that aren’t.

Let’s say a student does get the correct meaning of a sentence you just said. You ask, “Do you understand?” and that student nods. He understands, so he says, “Yes.” But next to him is another student, who also says, “Yes.” That student also understood the sentence. Problem is, that student understood it incorrectly. He didn’t realize that one of the words meant something other than what he thought it meant. He’s answering to the best of his knowledge and belief. He really thinks he got it.

Then there’s the kid sitting in the back row. He’s totally lost. He knows perfectly well he has no idea what the teacher just said in the target language. But heck if he’s going to admit that in front of the object of his adolescent affection, who happens to be sitting in the second row. The girl two seats over is also confused, but she’s not going to say, “No, I don’t understand,” because she’s tired of being “the dumb kid.” She knows that, if she says she understands, the teacher will go on to something else, and she will be off the hook—at least until the test.

Students who are confused are a crucial reason to find a better way to deal with comprehension in the language classroom. A confused student is often a student who engages in Undesirable Student Behaviors. These behaviors vary according to the age and situation, of course, but they have in common that they are usually irritating to the teacher and disruptive to the learning environment. In addition to being confused themselves, these students are preventing others from getting the input they need to acquire the language.

Comprehension is one of the strongest behavior management tools in the foreign language classroom, because the vast majority of kids just want to be able to do something right: get the right answer and earn legitimate approbation from an adult in their life. To do that in the language classroom, they need to understand what’s going on. If you give a student the ability to earn your approval, by making sure they understand what you’re saying, they will be so “distracted” by the opportunity to “get it right” that they’ll forget to do those annoying things kids do for… reasons. Reasons like the need to distract themselves from the bad feeling of not being able to do what you’re asking, or the need to distract others from the fact that they don’t understand or can’t answer the question. It’s usually more acceptable among the less-than-“perfect” students to be the student with behavior issues than to be the student who’s “stupid.”

There’s also the big theoretical reason to strive for comprehension (which is also a very practical one): we’re teaching with Comprehensible Input. Or, better stated, we should be teaching with Comprehended Input. All the potential understanding in the world won’t get the language acquired, just like the brightly colored seed packets that are still in the kitchen drawer in October are only a potential flower garden, not cut flowers in the vase.

Meaning matched to language equals acquisition. As teachers, we provide the language for our students. The meaning matches come from the student. But that meaning has to get into the students’ heads somehow. It happens when we establish meaning. First, we tell the students what the new language means, and then later as we use it over and over, in different contexts, we cue them to remind them of the meaning we have established. We do this so they can quickly and efficiently match up that meaning with the language they’re hearing or reading.

The match needs to be quick and efficient because students can’t wait for meaning. They have to have it ready to go when the language comes into their ear. (Reading is a bit more forgiving, because the reader can go back over things as often as they like; but, to be an efficient reader, there can’t be very much of that going on.) The amount of time a student can “wait” between hearing a sentence and matching it with meaning gets longer as students acquire more language, because most of the incoming language is automatically matched with meaning, so that there are only a few bits that need to be consciously thought about. The thinking could be a guess, or it could be a reminder from the teacher or something in the environment (a sign, something written on the board, etc.) that gives the student the meaning when it’s needed. Right when it’s needed.

If, on the other hand, the conscious thinking—the wondering about what the missing pieces of that sentence mean—goes on too long, even if the student is given the meaning, it’s too late. The original language that would have been matched to the meaning has fled. If that language is no longer in the buffer, where the student can “hear” it, there can be no match because there is no language to match up to the meaning. This is why approaches that claim to use Comprehensible Input, but which only evaluate comprehension after a long period of input, are far less efficient in terms of acquisition: large chunks of incoming language, which could have been matched if the meaning were given right away, are not matched. It really doesn’t help acquisition when the student says to herself, “Oh, I see. The story was about a man catching a rabbit, not a squirrel,” because, by that time, whatever the target language word for rabbit was, is gone. Worse, it’s been matched to the meaning of “squirrel” however many times it has been used, and that’s an incorrect match that needs to be overwritten with many more correct matches.

We want to know if students really understand everything, but asking them if they understand won’t cut it. What’s a teacher to do?

If you can—if your class has a shared fluent language—simply ask them, “What did I just say?” and invite a quick statement in the fluent language of what the target language sentence meant. This isn’t translation. Translation is sitting down and analyzing stuff in writing to produce a written version. This is simply students stating some meaning in a language they can already state things in without effort. It’s quick, it’s accurate, and it’s practically a non-event. If you ask a question, and every student in your class isn’t able to answer it immediately, it’s worth finding out whether they actually understood the question. Again, the way to do this is simple: “What did I just ask?”

Many teachers resist the use of English (the most frequent shared language, in the U.S. at least) in this way. There is a feeling that this is “cheating,” or that students won’t bother to listen to the target language if they know a translation is coming.

The point is that these quick comprehension checks are not happening after every single sentence. They are an assessment. They are done frequently, but judiciously, and for a reason. There is no expectation on the part of students that they can simply sit still and “wait for the translation”; much of the time, they’re expected to comprehend and respond appropriately without any translation going on. It’s an investment of a small proportion of English (compared to the mass of language the students are hearing and using) that gives big dividends in the comprehension of the language that follows, when it’s recombined and used in unexpected contexts. That’s the recipe for many, many repetitions that builds structure and vocabulary in student brains. Comprehension checks can revitalize a CI classroom that is having difficulties. Many problems with teachers using CI are because “their I isn’t C enough”—students aren’t really understanding accurately. Fluent teacher brains and acquiring student brains are very different, and it’s easy to forget what acquisition is like. This use—not abuse—of English gives us the equivalent of a window into the brain. There’s no other way we can see so quickly and so accurately just what the student believes the meaning of a piece of language is. Open a window or two, and see for yourself the gains in understanding.

Terry Waltz can get herself into trouble in a dozen or so languages and back out of trouble again (with luck) in three. She has several posters and games available on Teacher’s Discovery, and you can find more of her writings on CI at terrywaltz.com.

Q & A with Terry Waltz

All I got from this article was CI teachers use English to establish meaning… How often would she check to see if the kids understand? I agree translation all the time is bad, but why isn’t some OK?

Translation some of the time is indeed OK! It doesn’t have to be­—and in my opinion should not be­—reserved only for the initial introduction of new vocabulary. Using the native language (usually English, in the U.S.) to quickly know whether or not the understanding the students have is the same as yours is the most efficient use of class time.

That doesn’t mean I immediately translate everything into English. I want them to have the time to process and the thrill of “getting it,” but I can’t risk some students not getting there, because the brain can’t acquire language it doesn’t understand. So while I’m “on” a given sentence, asking questions related to it or discussing it, I’m always going to do a comprehension check as part of that, and do it sooner rather than later, because misunderstandings and lack of comprehension multiply fast. I’ve had too many experiences early on in my CI life, when I wasn’t as experienced speaking comprehensibly to beginners, where students looked engaged and content but turned out to have either a wrong idea or no idea at all of what I was saying.  Another important thing to remember is that even if my language is perfectly comprehensible to the students in front of me, they are all human beings. People take away different things when they listen, even when they’re listening mindfully and voluntarily, which students in school often might not be. There are so many distractions, both avoidable and unavoidable, and so many circumstances in our students’ lives that impact their ability to concentrate and really listen, that not checking whether they understand is almost certain to lead to students getting lost and frustrated and giving up on the class (for the day or for longer!). As students become more proficient, I will use fewer comprehension checks per minute of input, but that’s because a lot of the language is already solidly in their heads. I need to ask first-year students what “Es un chico simpático” means, but I would (hopefully!) not need to ask a third-year class that same question.