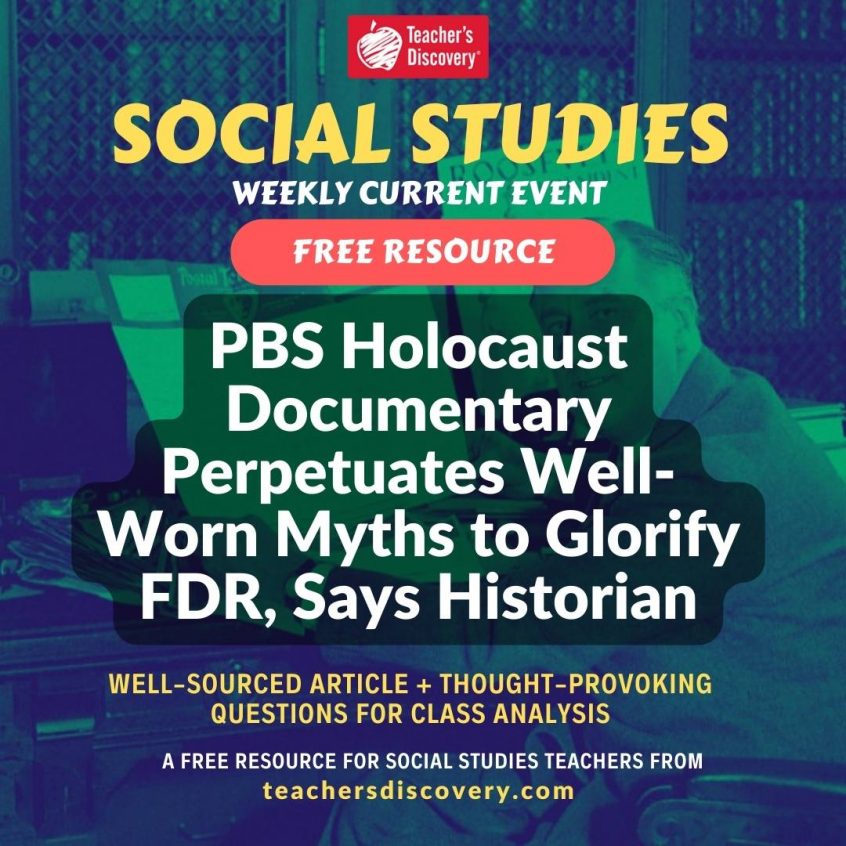 The following Social Studies event discussion is based on the original news article PBS Holocaust Documentary Perpetuates Well-Worn Myths to Glorify FDR, Says Historian, published September 18, 2022, by Matt Lebovic, The Times of Israel.  The article reports on how, early in his new film “The U.S. and the Holocaust,” documentarian Ken Burns makes claims that glorify FDR that one historian calls "well-worn myths."  Below you will find the article and some critical thinking questions to pose to your Social Studies students. 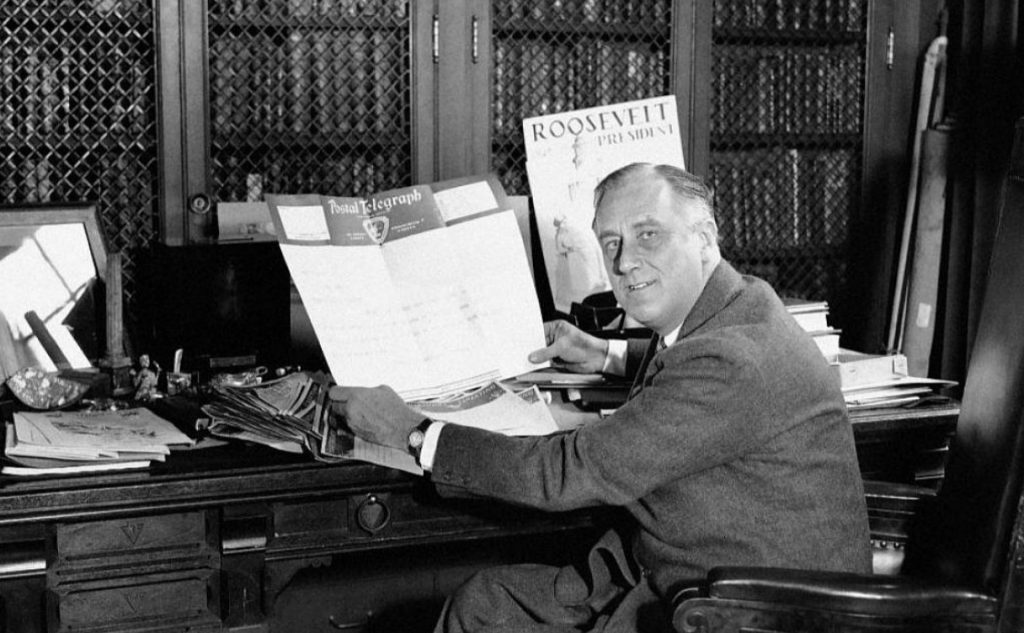 Early in his new film “The U.S. and the Holocaust,” documentarian Ken Burns claims the United States admitted more Jewish refugees fleeing Nazi Germany than any other country on Earth.

The problem with this statement, according to historian Rafael Medoff, is that it flies in the face of publicly available data on refugees from that period.

Calling Burns “seriously mistaken” about the issue of Jewish refugees, Medoff told The Times of Israel that the discrepancy is connected to several other “well-worn myths” that appear in “The U.S. and the Holocaust.” These myths, said Medoff, run the gamut from why the US could not rescue Anne Frank to Roosevelt’s role in the “St. Louis” affair, alongside the perennial debate on bombing the tracks to Auschwitz.

Medoff is an American professor of Jewish history and the founding director of The David Wyman Institute for Holocaust Studies, which is based in Washington, DC. He is the author of “America and the Holocaust: A Documentary History,” among other works on the Holocaust and Zionist history.

On the subject of immigration, for example, Medoff said it is true that during the years before the Holocaust and the genocide itself, the US admitted approximately 200,000 Jews into the country. But in a period of just two years (1939-1941), the Soviet Union took in 300,000 Jews fleeing Nazi-occupied Poland. Similarly, said scholar Medoff, Britain demonstrably surpassed the US in admitting more than 315,000 Jewish refugees to territories it controlled.

“In 1942, the numbers admitted by the American and British governments were similar,” wrote Medoff in a recent op-ed. “In 1943, however, there was a significant gap between the two. That year, the United States admitted just 1,286 German immigrants. The British, by contrast, admitted 8,507 Jewish refugees to Palestine in 1943, as well as small numbers to other British territories. Those trends continued in 1944 and 1945.”

Added Medoff, “Is it really impressive if the president of a country claiming to represent high ideals of humanitarianism was slightly more generous in admitting refugees than, say, the military juntas ruling in South America? Is that the moral standard by which we as Americans judge our country and our leaders?”

In an interview with The Times of Israel, Medoff spoke about the “well-worn myths” he believes “The U.S. and the Holocaust” is helping to perpetuate.

The Times of Israel: The story of Anne Frank and her family’s attempt to flee Europe is one of the film’s narratives. The major obstacle facing the family—according to the film—was that 300,000 Jews were ahead of them in applying for US visas. You have said a more obvious obstacle was the Roosevelt administration’s efforts to leave unfulfilled the existing, modest quotas on Jewish refugees. Can you explain why this is an important distinction?

Rafael Medoff: Public opinion was not in charge of US immigration policy; President Roosevelt was. It was the Roosevelt administration, not the public, that decided to suppress immigration below what the existing law permitted, by searching high and low for reasons to disqualify visa applicants. One of the main reasons the waiting list was long was because the German quota was kept unfilled in 11 of Roosevelt’s 12 years as president. More than 190,000 quota places that could have been used for Jewish refugees instead sat unused. The year that the Frank family tried to immigrate, 1941, the quota was only 47% filled; there was plenty of room for Anne and her family—if the administration had not been trying so hard to keep Jews out.

The film portrays the “St. Louis” affair—when the US refused to admit a ship of Jewish refugees and four European countries wound up agreeing to divide the refugees among them. But in your book, “The Jews Should Keep Quiet,” you describe how Treasury Secretary Henry Morgenthau raised the idea of letting the refugees into the US Virgin Islands. Can you explain Morgenthau’s plan? Why do you think Burns left this piece of history out of the film?

After the Kristallnacht pogrom, the governor and legislative assembly of the US Virgin Islands offered to open their doors to Jewish refugees. So when the St. Louis was hovering off the coast of Florida six months later, Morgenthau asked Secretary of State Cordell Hull about letting the passengers stay in the Virgin Islands, on tourist visas. Hull consulted with the president, then told Morgenthau it couldn’t be done because to qualify for tourist visas, the refugees would have to prove they had a safe place to which they would later return.

That was a Catch-22: Hull was saying that because the country from which they came was unsafe, the Roosevelt administration wouldn’t give them haven—and thus sent them back to that same unsafe place. Although it seemed at first that they would have to return to Nazi Germany, four other European countries took in the St. Louis passengers—but three of those countries were invaded by the Nazis less than a year later.

Whatever Ken Burns’s motive for omitting the Virgin Islands issue, he did a disservice to the historical record.

When it comes to whether or not the Allies could have bombed the train tracks to Auschwitz-Birkenau, the film’s basic take is that bombing train tracks en route to the death camp—or the camp itself—would not have done much good. Historians in the film also commented on the lack of precision bombing, and how destroying the gas chambers might have killed hundreds of prisoners on the ground. Do you agree with these assessments?

The Roosevelt administration never said the reason it wouldn’t bomb Auschwitz was because the prisoners might be harmed. In fact, the US bombed the Auschwitz oil factories, and the Buchenwald rocket factory, in broad daylight—in other words, knowing that slave laborers would be there—and indeed, some of them were killed or injured. So that was never a factor in the US administration’s decision-making at the time; it’s just an excuse concocted in recent years by defenders of FDR’s Holocaust record.

In any event, if US officials had been worried about hitting prisoners, they could have bombed the railways and bridges to Auschwitz, where there were no prisoners. That would have interrupted the deportations of hundreds of thousands of Hungarian Jews to Auschwitz. Bridges in particular took a long time to repair. When 12,000 Jews were being gassed to death in Auschwitz every day, even a brief interruption could have saved lives.

At the time, US officials claimed they couldn’t bomb those railways because it would require diverting American planes from distant battlefields. But that was false. US planes were already bombing the Auschwitz oil factories, and they also bombed railways throughout Europe—but not the ones leading to Auschwitz. The real reason they rejected the bombing proposals—which were made by at least 30 different Jewish officials and publications—was that the Roosevelt administration had decided that, as a matter of principle, it would not use military resources for humanitarian purposes. That policy was adopted four months before the requests to bomb Auschwitz began, and US officials simply applied it when those requests were made.

The terrible irony is that the US did sometimes use military resources for non-military purposes, such as when American troops were sent to rescue the Lipizzaner dancing horses, or when military personnel was used to rescue medieval paintings and other cultural artifacts. Apparently, horses and paintings were a higher priority than Jews.

You were one of the historians consulted on a new Jerusalem memorial to James G. McDonald, the first ambassador of the US to Israel. As the key adviser to President Roosevelt on refugee issues, McDonald resigned his position in 1935 out of frustration for being unable to convince FDR and other leaders to take action. Why would Burns omit McDonald from a film focused on refugees?

More than a decade ago, the US Holocaust Museum published McDonald’s diaries. Subsequent research by the Wyman Institute revealed that McDonald had been much more critical of Roosevelt’s refugee policy than the editors of the diaries had acknowledged. So when the museum decided to start creating exhibits and programs promoting the notion that FDR tried to rescue the Jews, McDonald’s story became a problem—it contradicted the museum’s new narrative. McDonald was completely omitted from the museum’s 2018 exhibit on “Americans and the Holocaust”—despite the museum director’s explicit written promise to the McDonald family that he would be included.

Ken Burns has said his film is based on that exhibit, and the museum’s staff members were his consultants, so it appears that Burns’s omission of McDonald is consistent with the museum’s approach.

It’s tragic that the exhibit and the film would exclude this noble American statesman, whose efforts to help the Jews deserved to be highlighted, not ignored.

A lot of people say that adopting a few “well-worn myths” is a small price to pay for an extraordinary documentary about antisemitism and other forms of bigotry in the US. Why do you think these issues—the “well-worn myths”—should be pointed out? Is it dangerous to keep repeating and validating the myths?

Misrepresenting the historical record is never justified. Burns could have told the truth about FDR’s policy toward Jewish refugees, and the failure to bomb Auschwitz, and still made a valuable film about the problems of antisemitism and racism in America in the 1930s—which is exactly what filmmaker Martin Ostrow did when he made his film “America and the Holocaust,” for PBS back in 1994.

Presidents should be held accountable for their policies. Burns is wrong to blame “public opinion” for FDR’s choices. The public didn’t force Roosevelt to keep the St. Louis passengers out of the Virgin Islands. The public didn’t compel him to leave 190,000 quota places unfilled.

Will some future filmmaker try to blame “public opinion” for the Clinton administration ignoring the Rwanda genocide, or for the Bush and Obama administrations doing so little to stop the Darfur genocide? I hope not.

Documentarians have an obligation to present the facts of history, even if those facts reflect badly on their favorite president. 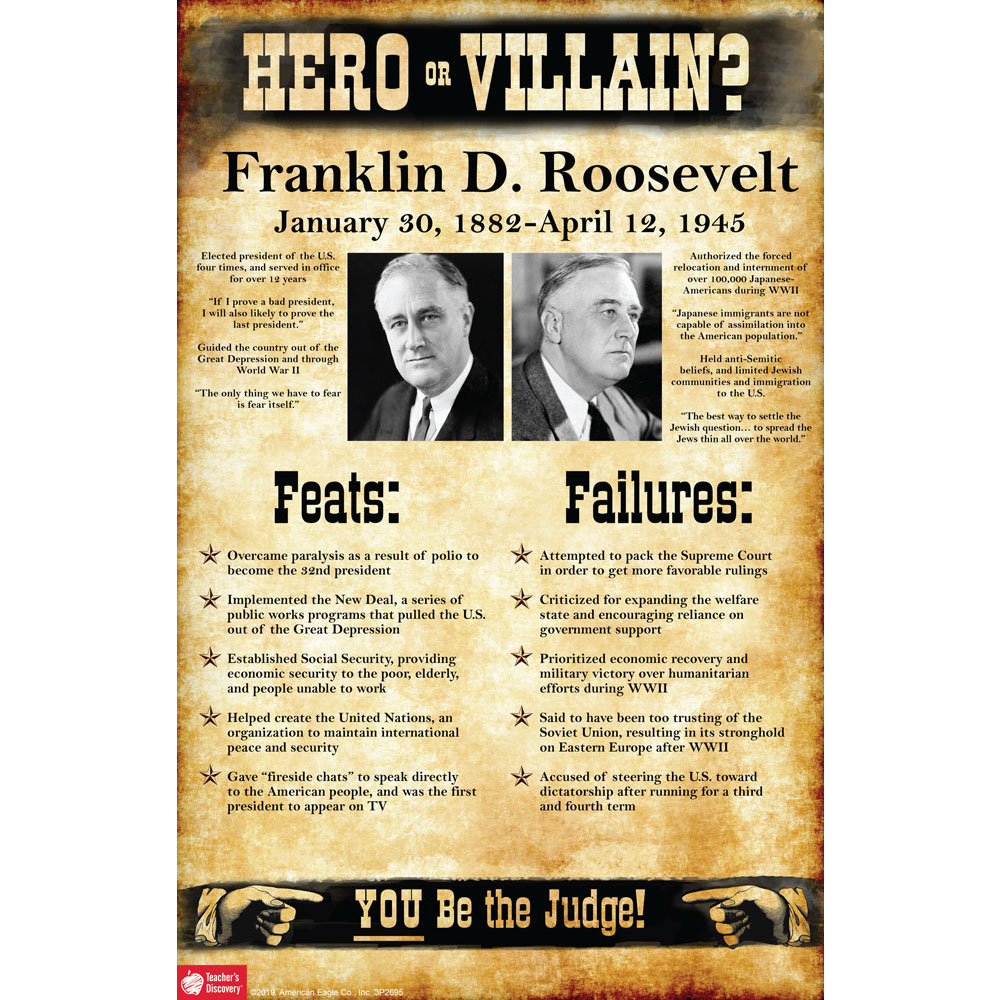 When it comes to Franklin D. Roosevelt, filmmaker Ken Burns and historian Rafael Medoff don’t see eye to eye—but who’s right? Help your students become critical thinkers by showing them the feats and failures of one of America’s greatest presidents.